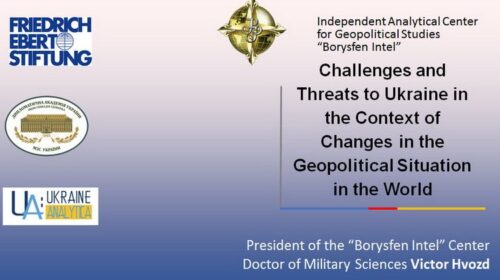 On the round table “International Security: Challenges and Opportunities for Ukraine” at the Diplomatic Academy of Ukraine and the President of the “Borysfen Intel” Center’s participation in it

The time has come when humanity will no longer be able to turn a blind eye to the problems that arise in its life. And among the most urgent — the COVID-19 epidemic. Not all is clear with reasons for such a disaster, but as for its consequences… Especially with regard to the geopolitical situation in the world, which is associated with the redistribution of the balance of forces between the leading centers of power. This was discussed at the round table “International Security: Challenges and Opportunities for Ukraine”, which was organized last week by the well-known institution established under the Ukrainian Ministry of Foreign Affairs — the H. Udovenko Diplomatic Academy of Ukraine. The round table took place in the usual form today, when its participants remotely, through the Internet, join the conversation, which can be followed by the general public. The event was attended by well-known international experts, including Marcel Röthig, Director of the Friedrich Ebert Foundation in Ukraine and Belarus, Serhiy Korsunskyi, Director of the above-mentioned Academy, who is appointed the Ambassador Extraordinary and Plenipotentiary of Ukraine to Japan, representatives of research centers and educational institutions of Ukraine, etc.

Victor Hvozd, Doctor of Military Sciences, President of the “Borysfen Intel” Independent Analytical Center for Geopolitical Studies, who was invited to the round table, made a report. The topic of his report was “Challenges and Threats to Ukraine in the Context of Changes in the Geopolitical Situation in the World”. V. Hvozd briefly told about the latest changes in the geopolitical situation in the world and their reasons, the redistribution of balance of forces between the leading centers of power and the bipolar model of international relations, now led by the United States and China, these countries’ efforts to maintain control over the situation and avoid negative processes in their economies.

According to V. Hvozd, the number of patients with COVID-19 in China, from where the epidemic came, was about 90 thousand people (0.006 % of the population). At this, the fall in China’s GDP is estimated at 6 %. While the democratic and largely bureaucratic system of government in the United States, did not allow to impose strict quarantine measures as it was done in China. In terms of the number of patients, the United States ranked first in the world — almost 2.4 million (0.5 % of the population). However, the United States did manage to avoid significant economic losses and allocated sufficient resources to control the coronavirus thanks to its highly developed economy. The fall in US GDP due to the pandemic is about 5 %. A similar situation, according to V. Hvozd, is observed in the European Union, where the total number of patients with COVID-19 was about 1.4 million people (0.2 % of the population). As for the total GDP of the euro area, it has decreased by 7.7 %.

Although this is a significant decline, the EU will be able to cope with it, which is not the case with the Russian Federation, whose GDP has fallen by 12 % due to the pandemic and lower oil prices. What’s the matter here? The answer to this question is simple and well-known: the inefficiency of the Russian political and economic system, which is based on archaic Soviet principles. Even the current epidemic has not forced Moscow to reconsider its policy (also called neo-imperial), which remains inherently aggressive, populist and irresponsible at all levels. And at the time when leading nations are contributing to joint efforts to counter the spread of COVID-19 around the world and to address the effects of the epidemic, demonstrating their true importance in the world, Russia has stayed away from such global processes. Although it is very eager to return to the well-known “Big Seven”.

In his speech, V. Hvozd touched upon the changing balance of powers in the world, which is the main peculiarity of the current geopolitical situation, and drew the attention to a set of measures in political, economic, military, information and other spheres, including “hybrid” ones, which are used by the main centers of power — the United States and China — in the modern world. As a result, the new Cold War in the world is increasingly shifting from the West — Russia to the USA — China. The speaker mentioned many indicators that allow him to draw such a conclusion. These include the resumption of the implementation of the idea of integration of American and European markets, as a counterbalance to China’s economic expansion in Europe, the USA’s turning from the isolationist policy that characterized the beginning of D. Trump’s presidency to the traditional Euro-Atlantic and Trans-Pacific course, as well as promises to break diplomatic relations with China because it “pursues anti-American policy”.

Also in his speech, V. Hvozd spoke about geopolitical problems of the world in the context of the epidemic, the reasons for it, positive and negative consequences, the world’s vulnerability to challenges and threats, in particular, man-made disasters. He also drew attention to how some countries or political and economic groups are trying to use the effects of the COVID-19 epidemic to enrich or strengthen their political positions. In this context, V. Hvozd pointed out the role and place of our state in such a new world, as well as those aspects that are characteristic of Ukraine and distinguish it from other countries of Central and Eastern Europe and the Western region of the former USSR. This is, first of all, still a significant potential in the demographic, economic, military and military-technical spheres. In fact, Ukraine’s aggregate potential remains the greatest among the countries of Central and Eastern Europe, with the exception of Poland, which has been able to significantly strengthen its economy and gain political weight worldwide in recent years. In terms of its geographical location, Ukraine is in fact a “buffer zone” between Russia and the south-eastern flank of NATO and the EU, and is also a link between Russia and the countries of South-Eastern and partly Central Europe. Besides, it controls the northern and part of the southwestern Black Sea coast… Therefore, it is on Ukraine’s geopolitical choice between the West and the East, or Russia’s ability to return Ukraine to its sphere of influence (and whether the Ukrainian territory does not turn into the battlefield in case of an armed conflict between the above-mentioned countries) that their positions in the region depend.

Describing the problems of Ukraine as a state, V. Hvozd pointed out that among the known threats to it are those that are called internal, but no less important than others. And, perhaps, its future will depend on them. This is something that has been discussed in society for a long time, on which the policy of forces seeking to govern the country is based. In other words, it is slowing down the process of internal reforms, lack of real progress in fighting corruption, lowering the level of professionalism of the Ukrainian authorities, intensification of pro-Russian forces in the country, as well as low efficiency of the information and ideological systems of the state.

To remove these “barriers” on the way to strengthening Ukraine’s statehood, we should move towards European and Euro-Atlantic integration, pursue an active offensive policy to defend own interests, as do Poland, Hungary and Romania; consistently strengthen defense capabilities both at the national level and in cooperation with the United States and NATO; not give in to Russia and not “flirt” with it, persistently pursue an offensive policy to restore Ukraine’s territorial integrity; turn our state from an object of competition between the West and China into a platform for cooperation between them. In particular, in the form of a “transport bridge” between Europe and the Asia-Pacific region.

On the whole, the round table can be considered a successful event, where a specific conversation about the fate of our state took place. There were no general slogans that have long been of no interest to society, nor those who repeat these slogans from year to year, presenting themselves as the “Ukrainian elite”. The round table highlighted exactly what the Ukrainian society needs to defend Ukraine’s statehood at the time when it, along with world civilization, is trying to overcome extremely serious challenges.